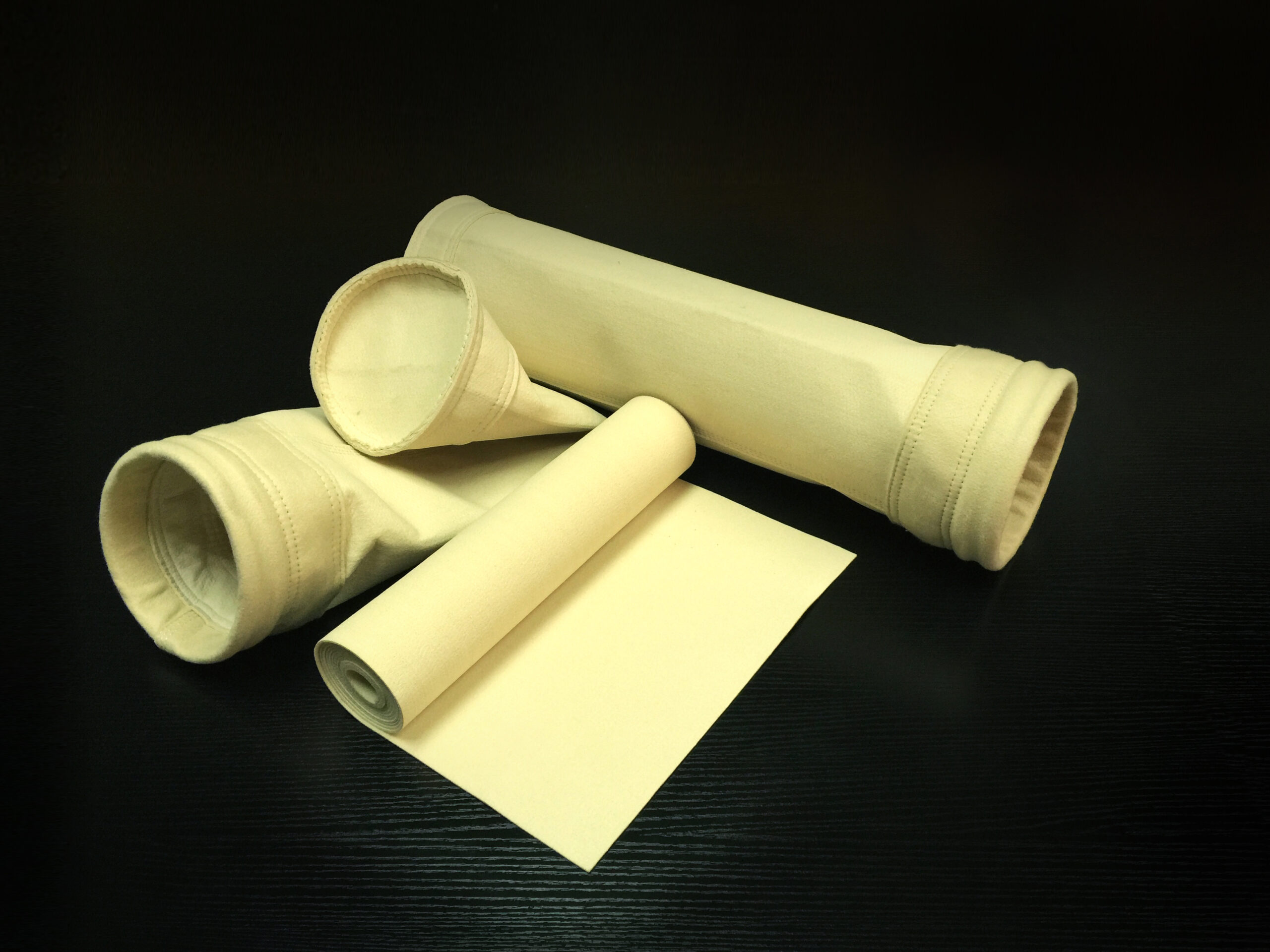 Fiberglass (or fibreglass) is a type of fiber reinforced plastic where the reinforcement fiber is specifically glass fiber. The glass fiber may be randomly arranged, flattened into a sheet (called a chopped strand mat), or woven into a fabric. The plastic matrix may be a thermosetting plastic – most often epoxy, polyester resin – orvinylester, or a thermoplastic. The glass fibers are made of various types of glass depending upon the fiberglass use. These glasses all contain silica or silicate, with varying amounts of oxides of calcium, magnesium, and sometimes boron. To be used in fiberglass, glass fibers have to be made with very low levels of defects. Fiberglass is a strong lightweight material and is used for many products. Although it is not as strong and stiff as composites based on carbon fiber, it is less brittle, and its raw materials are much cheaper. Its bulk strength and weight are also better than many metals, and it can be more readily molded into complex shapes. Applications of fiberglass include aircraft, boats, automobiles, bath tubs and enclosures, swimming pools, hot tubs, septic tanks, water tanks, roofing, pipes, cladding, casts,surfboards, and external door skins. Other common names for fiberglass are glass-reinforced plastic (GRP), glass-fiber reinforced plastic (GFRP) or GFK (from German: Glasfaserverstärkter Kunststoff). Because glass fiber itself is sometimes referred to as “fiberglass”, the composite is also called “fiberglass reinforced plastic.” This article will adopt the convention that “fiberglass” refers to the complete glass fiber reinforced composite material, rather than only to the glass fiber within it.

Glass fibers have been produced for centuries, but mass production of glass strands was discovered in 1932 when Games Slayter, a researcher at Owens-Illinois, accidentally directed a jet of compressed air at a stream of molten glass and produced fibers. A patent for this method of producing glass wool was first applied for in 1933. Owens joined with the Corning company in 1935 and the method was adapted by Owens Corning to produce its patented “fibreglas” (one “s”) in 1936. Originally, fibreglas was aglass wool with fibers entrapping a great deal of gas, making it useful as an insulator, especially at high temperatures. A suitable resin for combining the “fibreglass” with a plastic to produce a composite material was developed in 1936 by du Pont. The first ancestor of modern polyester resins is Cyanamid’s resin of 1942. Peroxide curing systems were used by then. With the combination of fiberglass and resin the gas content of the material was replaced by plastic. This reduced the insulation properties to values typical of the plastic, but now for the first time the composite showed great strength and promise as a structural and building material. Confusingly, many glass fiber composites continued to be called “fiberglass” (as a generic name) and the name was also used for the low-density glass wool product containing gas instead of plastic. Ray Greene of Owens Corning is credited with producing the first composite boat in 1937, but did not proceed further at the time due to the brittle nature of the plastic used. In 1939 Russia was reported to have constructed a passenger boat of plastic materials, and the United States a fuselage and wings of an aircraft. The first car to have a fiber-glass body was a 1946 prototype of the Stout Scarab, but the model did not enter production. 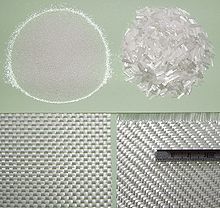 Unlike glass fibers used for insulation, for the final structure to be strong, the fiber’s surfaces must be almost entirely free of defects, as this permits the fibers to reach gigapascal tensile strengths. If a bulk piece of glass were defect-free, it would be equally as strong as glass fibers; however, it is generally impractical to produce and maintain bulk material in a defect-free state outside of laboratory conditions.

The process of manufacturing fiberglass is called pultrusion. The manufacturing process for glass fibers suitable for reinforcement uses large furnaces to gradually melt the silica sand, limestone, kaolin clay, fluorspar, colemanite, dolomite and other minerals to liquid form. It is then extruded through bushings, which are bundles of very small orifices (typically 5–25 micrometres in diameter for E-Glass, 9 micrometres for S-Glass). These filaments are then sized (coated) with a chemical solution. The individual filaments are now bundled in large numbers to provide a roving. The diameter of the filaments, and the number of filaments in the roving, determine its weight, typically expressed in one of two measurement systems:

These rovings are then either used directly in a composite application such as pultrusion, filament winding (pipe), gun roving (where an automated gun chops the glass into short lengths and drops it into a jet of resin, projected onto the surface of a mold), or in an intermediary step, to manufacture fabrics such as chopped strand mat (CSM) (made of randomly oriented small cut lengths of fiber all bonded together), woven fabrics, knit fabrics or uni-directional fabrics.

Chopped strand mat or CSM is a form of reinforcement used in fiberglass. It consists of glass fibers laid randomly across each other and held together by a binder. It is typically processed using the hand lay-up technique, where sheets of material are placed in a mold and brushed with resin. Because the binder dissolves in resin, the material easily conforms to different shapes when wetted out. After the resin cures, the hardened product can be taken from the mold and finished. Using chopped strand mat gives a fiberglass with isotropic in-plane material properties.

A coating or primer is applied to the roving to:

An individual structural glass fiber is both stiff and strong in tension and compression—that is, along its axis. Although it might be assumed that the fiber is weak in compression, it is actually only the long aspect ratio of the fiber which makes it seem so; i.e., because a typical fiber is long and narrow, it buckles easily. On the other hand, the glass fiber is weak in shear—that is, across its axis. Therefore, if a collection of fibers can be arranged permanently in a preferred direction within a material, and if they can be prevented from buckling in compression, the material will be preferentially strong in that direction. Furthermore, by laying multiple layers of fiber on top of one another, with each layer oriented in various preferred directions, the material’s overall stiffness and strength can be efficiently controlled. In fiberglass, it is the plastic matrix which permanently constrains the structural glass fibers to directions chosen by the designer. With chopped strand mat, this directionality is essentially an entire two dimensional plane; with woven fabrics or unidirectional layers, directionality of stiffness and strength can be more precisely controlled within the plane. A fiberglass component is typically of a thin “shell” construction, sometimes filled on the inside with structural foam, as in the case of surfboards. The component may be of nearly arbitrary shape, limited only by the complexity and tolerances of the mold used for manufacturing the shell. The mechanical functionality of materials is heavily relied on the combined performances of the both resin (AKA matrix) and fibres. For example, in severe temperature condition (over 180 °C) resin component of the composite may lose its functionality partially because of bond deterioration of resin and fibre. However, GFRPs can show still significant residual strength after experiencing high temperature (200 °C).

Composition. The most common types of glass fiber used in fiberglass is E-glass, which is alumino-borosilicate glass with less than 1% w/w alkali oxides, mainly used for glass-reinforced plastics. Other types of glass used are A-glass (Alkali-lime glass with little or no boron oxide), E-CR-glass (Electrical/Chemical Resistance; alumino-lime silicate with less than 1% w/w alkali oxides, with high acid resistance), C-glass (alkali-lime glass with high boron oxide content, used for glass staple fibers and insulation), D-glass (borosilicate glass, named for its low Dielectric constant), R-glass (alumino silicate glass without MgO and CaO with high mechanical requirements asReinforcement), and S-glass (alumino silicate glass without CaO but with high MgO content with high tensile strength). Naming and use. Pure silica (silicon dioxide), when cooled as fused quartz into a glass with no true melting point, can be used as a glass fiber for fiberglass, but has the drawback that it must be worked at very high temperatures. In order to lower the necessary work temperature, other materials are introduced as “fluxing agents” (i.e., components to lower the melting point). Ordinary A-glass (“A” for “alkali-lime”) or soda lime glass, crushed and ready to be remelted, as so-called cullet glass, was the first type of glass used for fiberglass. E-glass (“E” because of initial Electrical application), is alkali free, and was the first glass formulation used for continuous filament formation. It now makes up most of the fiberglass production in the world, and also is the single largest consumer of boron minerals globally. It is susceptible to chloride ion attack and is a poor choice for marine applications. S-glass (“S” for “stiff”) is used when tensile strength (high modulus) is important, and is thus an important building and aircraft epoxy composite (it is called R-glass, “R” for “reinforcement” in Europe). C-glass (“C” for “chemical resistance”) and T-glass (“T” is for “thermal insulator”—a North American variant of C-glass) are resistant to chemical attack; both are often found in insulation-grades of blown fiberglass.

Typical material appearance of a fiberglassCryostat

Fiberglass is an immensely versatile material due to its light weight, inherent strength, weather-resistant finish and variety of surface textures. The development of fiber-reinforced plastic for commercial use was extensively researched in the 1930s. It was of particular interest to the aviation industry. A means of mass production of glass strands was accidentally discovered in 1932 when a researcher at Owens-Illinoisdirected a jet of compressed air at a stream of molten glass and produced fibers. After Owens merged with the Corning company in 1935, Owens Corning adapted the method to produce its patented “Fiberglas” (one “s”). A suitable resin for combining the “Fiberglas” with a plastic was developed in 1936 by du Pont. The first ancestor of modern polyester resins is Cyanamid’s of 1942. Peroxide curing systems were used by then. During World War II, fiberglass was developed as a replacement for the molded plywood used in aircraft radomes (fiberglass being transparentto microwaves). Its first main civilian application was for the building of boats and sports car bodies, where it gained acceptance in the 1950s. Its use has broadened to the automotive and sport equipment sectors. In some aircraft production, fiberglass is now yielding to carbon fiber, which weighs less and is stronger by volume and weight. Advanced manufacturing techniques such as pre-pregs and fiber rovings extend fiberglass’s applications and the tensile strength possible with fiber-reinforced plastics. Fiberglass is also used in the telecommunications industry for shrouding antennas, due to its RF permeability and low signal attenuationproperties. It may also be used to conceal other equipment where no signal permeability is required, such as equipment cabinets and steel support structures, due to the ease with which it can be molded and painted to blend with existing structures and surfaces. Other uses include sheet-form electrical insulators and structural components commonly found in power-industry products. Because of fiberglass’s light weight and durability, it is often used in protective equipment such as helmets. Many sports use fiberglass protective gear, such as goaltenders’ and catchers’ masks.

To be our distributor